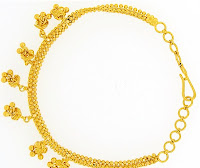 The bracelet wasn’t gold. It didn’t matter that much to her, but it was a symbol, wasn’t it? A metaphor. It’s not as if she’d had a green stripe on her wrist for the past year. It was a good fake.

Just like Trent. Or Rent. Or Kent. Real name probably Cent spelled with a C. Then you’d have to say Sent. Which is what she’d done. Sent him away—without the bracelet.

It was a pretty thing that never looked quite right on her thick wrist. She wasn’t heavy, but strong. That’s what her mother said, “You’re a strong woman.” So that fine, feminine bracelet looked out of place on her.

But she’d been flattered by the gift, by the thought that something so lovely, so delicate belonged on her body, and she’d blushed when he clasped it around her wrist, had cried when he kissed her hand, her cheek, her lips. It’s beautiful, she said. Thank you.

Her heart swelled even now to think of that lovely, tender moment. At least now she knew what lovely and tender felt like. It didn’t have to mean foolish, fool, stupid girl, what were you thinking? Those were her first thoughts when she handed it to the jeweler to be repaired, and he had said, “It’s not gold, you know.”

She hadn’t known, hadn’t known quite a lot. Charlatan—fraud—imposter—and a blush and tears again so she had to turn away from the jeweler. He was bent over his task, not looking at her, which gave her the moment she needed, a moment of grace, time to replace fool with tender. What might she see when she put on the bracelet now? What would she see for the rest of her life?

Posted by KCoskran at 5:55 PM No comments: 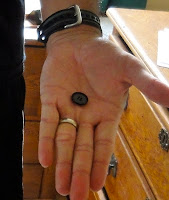 It was only a button, a button separated from its garment, lying in the palm of his hand, eyeing her, accusing her, the flat black pallor of the button reflecting his attitude, not his face, but his attitude. His face was impassive as always, smoothly handsome, sharp nose, ice blue eyes, lips too full for a man of his age, a bit of grey perfectly streaked above his ears.

Her mother mistrusted handsome men. “Don’t go out with a man prettier than you, “ she would say and then laugh because she had done just that, gone out with handsome men. “My Hollywood years,” she said and then let it drop that she had kissed Cary Grant, or was it Clark Gable? CG. Those were the initials. All Marcia could remember, but her mother hadn’t married them, just kissed and told.

Marcia had married her own CG, Charles Goodwin. It was a strong name, a handsome face, slight charm, but . . .

There’s always a but . . . a button this time, off his suit coat no doubt, middle button, her fault, held steady in the palm of his hand. She considered her options.

Option 1: Duck her head in silent apology, sew the button on quickly, hand him the jacket, the briefcase, get him out the door. Over. Done with. Problem solved.

Option 2: Wait for him to speak, to explain why he is standing before her in his starched shirt, black tie, creased slacks, holding a button in the palm of his hand at 7:08 in the morning, 12 minutes before they both should be on the train.

Option 3: Pretend she doesn’t see him or the button, finish buttoning her own suit, apply mascara, blush, lipstick, step around him if he is still there, and make the 7:20 train.

Option 4: Same as 3, but tell him where the sewing basket is.

Option 5: Say what in the hell do you expect me to do with that fucking button? and then proceed to option 3.

She quickly reviewed options 2 through 6—option 1 was never seriously considered—wondered what a mediator would suggest, something with an “I” statement, no doubt, as in I don’t have time to sew on your button. No, that’s too close to accepting responsibility for doing it.

Or they sew on buttons at the cleaners.

The mediated sentences are helpful without accepting responsibility, but so dissatisfying when CG is still standing there with the accusatory black button in his hand.

Wait. He’s about to speak.

“Is this yours? I found it under the bed.”

Option 7: Remember that the obvious, early solutions may be based on incomplete information or false assumptions.


Cheryl accented her dreamy look by draping herself in diaphanous materials—pink and green silks just short of transparent, chiffon blouses that billowed, long, swishing skirts that trailed behind her, sleeves that covered her hands so she appeared to be clothed in a cloud. The effect could be startling, her very appearance a proclamation—Titania is here, the fairy queen has arrived, angels will follow soon.

Her hair, as you have probably guessed, was a cloud of blond curls around her pale face. Her eyes were the color of emeralds. You expected a breathy, throaty whisper when she spoke, but when she did open her mouth you realized there was a real person under all the fluff. Her voice rasped. The hard consonants hit the ear as if she were speaking German or Dutch and focused your attention on the perfectly round face peering through whatever silk or chiffon concoction she had dreamed up that morning.

You could call us childhood friends—we were neighbors—but it was hard to like her. I wore consignment shop jeans, my brothers’ sweatshirts, and kept my hair long, straight, and in my face. In Junior High Cheryl still showed up in dresses with a train that she draped over one arm or gossamer outfits that rose and fell with every mincing step. The day she told me how much she liked my shirt, I snorted. There she stood in her ethereal baby blue glory saying she liked my hand-me-down Vikings sweatshirt. “You can have it,” I said.

Her eyes glistened, and she covered her face with that narrow hand. “I can’t,” she said and floated across the yard, up her own steps and into her house, the only gingerbread Victorian on the block.

There was something so false about her filmy fluff, but I know now that I envied her and hated the way the boys on my block, including my brothers, looked when she was around. Cheryl would always be seen; nobody would know I was alive.

So, as expected, I slipped into high school unnoticed, one of many nondescript, good-student girls in sweatshirts, but Cheryl was an item from the beginning.

I saw her coming down the stairs one day that first week, pink with pleasure at the attention. A line of senior boys at the top of the stairs were singing to her, then cracking up, Freshman fairy, come fly with me, Freshman fairy. Center stage. Just where she wanted to be, I thought. No senior boy would know I existed if I walked over him during passing time.

Have you ever been stuck? Really stuck in your own skin? You know what other people think of you, know how they see you, know it’s not right, but don’t know how to change. Can’t move off of square one because square two is nowhere in sight, and for Cheryl, square one was sweet, rosy, and comfortable. She was our image of cool in kindergarten, of beauty in grammar school, of eccentric in middle school.

I’ve been stuck too every since she jumped—or flew. I should have said something, should have given her my sweatshirt, helped her out of her ridiculous costumes, but how do you help somebody you’ve resented your whole life?

My brother Davy saw her come out of her third hour class and float—his word—into a group of guys. Oh, it’s the fairy princess. Fly to me fairy. Where are your wings?

She didn’t look at them directly, but she dropped something on the floor with each taunt—her binder, a pencil, the math book—and quickened her pace. Her tormentors kicked her things down the hall. Other kids at their lockers stopped to watch.

She’d shed her books and back pack by the time she reached the stairwell and climbed up on the ledge—floated up, Davy said—and spread her skinny arms. You could see the outline of her narrow body, more girl than woman.

From behind somebody said, Fly, fairy, fly! and she flew.