The woman sits at her desk with her hands on the keyboard.

The woman sits at her desk in her cubicle with her hands on the keyboard.

The woman sits at her desk in her cubicle with her hands on the keyboard and begins to type.

Her job is data entry.

Entry into what? Did a door open somewhere? She doesn’t see a door.

She just sits at her desk, hands on her keyboard, in her cubicle and does data entry.

Data. Pieces of information. Bits or are they bytes?

Bytes of information—data—that have nothing to do with the woman who sits at a desk in a cubicle with her hands on a keyboard.

Any woman. Anywhere. Could be a man, but usually not.

Goes in and lines herself up in a row—say the 3rd row—and a column—perhaps the 5th column—so when the woman or unlikely man in the next cubicle at her desk with her hands on the key board begins data entry, the screen shows something new in the 3rd row, 5th column. She might not notice it at first, with her hands on the keyboard and eyes on the rows and columns to be entered, but when, not if, but when, her attention flickers, she does see something—5th column, 3rd row—error message, and she leans in to get a better look and sees the woman from the next cubicle stretch her hand out. She’ll take that offered hand, grab on, and enter herself, 3rd row, 6th column, and then there will be two errors in row 3.

The woman in the next cubicle sits at her desk with her hands on the keyboard, entering data automatically, without thought—no thinking required until she sees the flicker—3rd row, columns 5 and 6—error message. She leans in . . .

The portal widens. She goes.

We can all do it, lean in, grab a hand, and enter.

Stretch out your hand.

The earrings were the only thing she wanted from her mother’s meager estate and now she had lost one. They were a wedding present from her father to her mother, tiny, perfect pearls set in gold and glued to an earring clip. She wore the earrings almost daily when she was a child. They were the central ornament in her dress-up fantasies, a gift from the king, she would proclaim in an exaggerated accent nobody could place. Her mother didn’t wear them, and her father never commented on the fact that his bride had turned his wedding gift into a toy. Maybe he didn’t care or notice.

Or, more likely, he wasn’t many weeks into the marriage before he realized that the pearl, round, smooth, white and pure, was not the most appropriate gift for a buxom, wide-mouthed redhead named Ruby.

Rubies would have been too obvious, he told her later, long after Ruby was gone, and it was just the two of them. “The earrings are yours,” he said. “Perfect for you.”

They hurt, the way clip-on earrings do. She could have converted them to studs, but she liked the pinch to her earlobe and the eventual throb which had her removing one and then the other, rubbing her lobe. It reminded her of Ruby, the beauty and the pain.

“Ruby was a package,” her father said. “You got it all.” He paused and looked at her, abashed and embarrassed. “I wanted it all.”

How like him to give pearls to the one woman who not only would never wear them, but would resent them as an overt attempt to define her. Ruby must have loved him briefly—who wouldn’t love that sweet man?—but she bored quickly and was gone before Garnett turned ten.

Garnett checked the pocket of her coat, her jacket, every compartment of her purse. She’d probably taken it off midway through dinner, when the sharp stab was too much, held it in her hand, thinking she’d snap it back on and then didn’t.

Just like her mother—who said she would do something and then didn’t. I’ll pick you up on Saturday. We’ll go to the zoo or the movies or Grant Park and feed the ducks. Garnet would wait, in her clean clothes, hair brushed, ready when the call came, running late, can’t make it, Sweetheart, next time, next time. The pain was a quick sharp stab of disappointment and expectation. If it bothered her father, he never said anything and always had an extra hour to take a kite to the vacant lot or to walk down to the creek and catch tadpoles. Nothing her mother would ever suggest.

He was the pearl, polished by irritation perhaps, but smooth and beautiful. She didn’t need two of everything. She had the one that mattered. 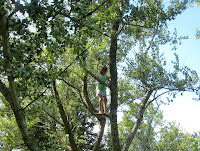 She was in the tree, high up, invisible from the ground. A female Tarzan. Tarzana she called herself. Not Jane. She did not respect Jane.

She didn’t know the word subservient and wouldn’t have thought of weak, but that was what she didn’t like about Jane. Plus the one-syllable name was too ordinary. Something out of a boring book. All anybody named Jane could really expect out of life was a dog named Spot.

But Tarzana lived with the apes and the leopards. Tarzana hung around with monkeys and hurled coconuts at unsuspecting passers-by. She knew it was a game, a fantasy, but if you’re going to pretend, think big. Her alternate identity, the one on the ground, was queen of England, the only country wise enough to have a queen. She didn’t much like the dowdy look of the present monarch, but that didn't stop her from taking on the role. However Tarzana was her preferred identity, her best game. Tarzana was strong, feral, in touch with monkeys, and above it all.

She was lounging along her favorite branch when she heard the rustle of somebody coming along the path. She shifted just enough to watch them approach—a man and a girl. He had his arm around the girl who was laughing. There was something wrong with the laugh. It was put on, a fake. A trill with no laughter in it. The pair stopped just under her tree.

His voice was too low and throaty to catch his words, but the girl's voice was high pitched and very clear. I have to go. No. No. I said, No. Really no.

The tree trembled when he pushed the girl against the trunk. She said no again, and then the words were muffled as if he’d thrown a blanket over her head.

Tarzana parted the branches to get a better view. His mouth was over the girl’s, and the girl was beating on his back with her little fists, fists like Jane’s. The tree shook. No, no!

Tarzana raised her throat to the heavens and sent out her danger call, a high-pitched shriek that carried down the trunk and through the jungle behind her suburban park. She swung down a branch, raised her throat again to the staccato screech of danger, then swung another branch lower, shaking the canopy. The whole tree shook with her fury.

“Jesus Christ!” the man yelled and pushed the girl against the tree, then ran. Tarzana gave her two-pitch yell again as he crashed through the jungle.

The trembling stopped. The tree quieted. Tarzana let herself down slowly. She didn’t want to scare Jane who she could see was sitting on the ground at the base of the tree sniffling into her two hands.

She landed on all fours in front of the girl.

The girl wiped her eyes and looked at Tarzana. “My name is Janet,” she said.