“Here. This must be yours,” he said and thrust a pen at her. “Not mine.” He hoisted his pack to his shoulder and backed out the door, grinning that dimpled smile he had. She was sure he practiced it in the mirror—backing out, not taking his eyes off her, holding them both steady as he escaped—her word, not his—but how else to describe his departure?
He didn’t like stuff—furnishings, decorations, the detritus of being alive, wouldn’t buy anything he couldn’t carry in one hand, although she did notice he slept in her big bed after all the high jinks—his word, not hers—slept like a baby, smooth-faced, breath almost inaudible—clear, clean. When he woke up, he was up, moving, splashing water in the bathroom, humming as he shaved.
She liked the extra five minutes in bed, the rolling over on her pillow, the last warmth of the night still in the blankets. Sometimes he jumped on her when he was done, sprawled across her curled body, smelling of mint and soap and aftershave—and they played and wrestled until she was awake and shivering. “Get up,” he’d say and she would.
It was different this morning. She knew he was in the bathroom, heard the run of water, saw the line of light under the door, but heard no humming, and knew before it didn’t happen that there would be no leap on the bed, no early morning tussle.
Nothing. It was over. Backpack packed. He was going, going, gone, backed out the door and gone.
Afraid to say it. Well, that was good. Some emotion stirred, fear if not regret. And she had to admit, he left her something: a pen. Blue and silver. somebody’s logo on the side—Twin City

Orthopedics—and a number to call when she felt broken again.

We are old friends. Long-time friends, she'd say, old that way, not the other. I don’t care. Old friends, long-time friends, childhood friends—all the same to me.
And we were—are—old in spite of her quick disclaimer and all those sit-ups. We are old friends and know the other’s secrets, wishes, gifts, faults and sins—the whole catastrophe—as Zorba said in another context.
We were young enough to have danced like Zorba on the beach—our first holiday alone,

without parents. We spread our blanket on the hard sand, the tide on its way out, shed our cover-up and danced. Slowly at first, choosing the steps carefully—she humming softly, then louder as I picked up the pace, both of us finger to thumb, bounding across the sand in imitation of a Mexican actor being Greek, being free and passionate and young. I said young, but Zorba wasn’t young. It was we who were young and caught up in passion, not youth. We learned better than Basil, the young awkward man, took it to heart, felt the passion.
And then forgot it all in the tumult of marriage, babies, work, meetings—oh, god, the meetings, going here, there. Forgot it all until now. Not young. We are old friends, and if I say the word, she’ll stand slowly, but upright, raise her arms, curve her arthritic finger to her thumb and start the song.
I’ll start the dance, and she’ll join me. We’re not on the beach, but we can still dance.
Oh, yes, we still dance. 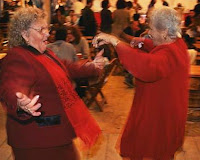 A summer cold. Who the hell got a summer cold? The very name was an affront—an oxymoron. Summer was hot. Cold by definition was for winter. A summer cold was both a mistake and an accusation, as if he were less than he should be, weaker, inept, inexperienced, advancing into dotage somehow, although at 27, the right side of 30, he liked to say, he clearly was not.
Sabena asked him if he’d been out in the sun—his nose was that red.
Clarice wondered if there’d been a family emergency—the red eyes.
Jessica wondered if he was dieting—the scrawny neck.
“No, a summer cold,” he croaked, his ruffled voice forcing its way through clogged sinuses.
“Oh, sorry,” Sabena said as she backed away. (Yes, she literally backed away, then turned and ran.)
Clarice nodded sympathetically, “Poor baby,” she muttered. “You should take better care of yourself.”
“It’s not my fault,” he said and an hour later repeated it to Jessica when she said, “Oh, yuck!” and covered her lovely mouth with the smooth hand he had yet to hold.
“Not my fault,” he said for the third time. “It’ll pass.” He tried to relax. He knew tension made his neck ropey and thin and hunched his shoulders around his chest.
“Feeling better already,” he said and was going to say something like “looking at you would make anybody . . . “ or should he say any man, emphasizing his maleness? No, he should say, being with you—emphasis on you—or should he speak her name specifically? Probably. He started again. “Just being near you, Jessica, would make any man feel better.” Good.
“Especially this man,” he said. Better.
But it was too late. She’d scooped up her papers as he was talking—well, whispering adenoidedly—they were in the library—and she was ten feet away by the time he got it all out.
She did turn and give the little tata wave women like her had perfected, which meant she’d heard the man part of his speech. He hoped.