It was still, ten below, no wind, no wind chill. Just chill. Very cold. The snowman her granddaughters made was frozen in place 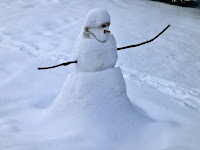 and had acquired a skirt. Successive snowfalls petaled around the base and, in spite of the unusually long carrot nose, the snow creature had shape-shifted from snowman to snow woman.

The hat was Carl’s fishing hat, not worn in years, so she’d told the girls they could have it for the snowman. The old hat was now mounded at the crown with a drape of snow at the back of the neck like a veil or a flap. The round ball of chin was bearded with fresh snow and so the creature was neither he nor she, but an androgynous figure that would have enraged Carl.
He would never have offered his hat in the first place, but just the combination of skirt and beard would have sent him out the door with a rifle to annihilate the snowman/woman. Not going to have a queer in my yard.
She could see him standing on the porch now, rifle at his shoulder, dismantling the snow creature piece by piece. He’d shoot off the carrot nose first, dislodge the two rock eyes, slice off the hat, then decapitate the creature before blowing up the body and spreading the snow skirt across the yard.
You can’t shoot a gun in the city, she’d say as she’d said every time he shot squirrels on their back fence.
It’s a 22, not a gun.
She sighed and took her coffee into the den where she couldn’t see the snow creature. It wouldn’t have survived Carl, and the granddaughters would wail if it was shot.

But it would only make it to the first thaw.

Was she wrong to miss him?
It was so quiet. Still. Ten below. No wind. No wind chill. She pulled her sweater around her narrow shoulders. No Carl.