He was not a small man, or a young man. Snow white hair, lots of it, but white, ample like his waist. He could carry the ladder, prop it against the side of the house, settle the feet in the flower bed. 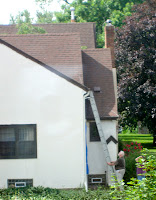 You’re killing the tulips.
They’ve been gone for weeks.
But the bulbs. The bulbs. You’re crushing the bulbs.
The ladder feet were, in fact, splayed over the limp brown tulip leaves. She wondered if that increased the possibility of slippage, thought of saying something, decided not to. He was pushing and shaking the ladder, making sure it was planted and solid.
He was good with tools—always had been—and she trusted the ladder was well settled over the crushed tulip bulbs—she could buy more—but she couldn’t imagine him actually mounting the ladder. Bad knees, bulging belly grazing the steps, holding his body out so far that his weight could pull the whole thing backwards.
He’d ask her to stand at the bottom to steady it, but what could she do if it started to slide or he came down on her? She saw how he climbed the stairs to their bedroom. How could he mount a ladder?
Steady it for me, will you? He was on the first step, his belly pushing him back so far that his arms were barely long enough to hold the sides.
I’ll go up, she said. Let me. You always do it.
He took a second step. His stomach scraped along the ladder raising his shirt, exposing an expanse of soft, white skin.
I’ve never been up the ladder, she said. My turn. She was afraid of heights or so they both thought, but her voice was insistent, even prodding. He stepped down the two steps, bowed to her and swung his right arm to indicate that the ladder was open. Please Madam, do as you wish.
She started to climb, looking down at first, which unnerved her by the fifth step, so then she looked up to the smooth slate roof of this house they’d lived in for more than 40 years.
She paused at the second story, peered into Diana’s room, the bedspread perfectly stretched over the narrow bed, the picture of the Monkees still on the wall.  She took a deep breath and climbed higher, looking up, not down, up to the roof on a ladder that moved slightly under the soft fall of her foot. She grabbed the gutter with her hand without thinking, then remembered he said he never grabbed the gutter—too unstable. She took another step, and there was the roof of her house, the house she’d lived in her whole adult life and this a part of it she’d never seen.
Her first thought was to clamber out onto the roof, to dance across it, to celebrate what at that moment felt like a crowning achievement, but she didn’t. She was old too, not potbellied, but old, and there were gutters to be cleaned. She dug her hand into the rotting leaves and threw them down, handful after handful. Plop! Plop! Plop!
Hey! Watch where you throw that stuff!
She knew what it was like to be on the receiving end of rot and decay and tried to throw it wide—the best she could—and refused to come down when the gutter was clean. He called and called to her—faint voice—but she was in the clouds.

She walked around the block one step at a time, pausing like a child to kick a leaf or notice a dent in the grass where a rabbit spent the night. She walked slowly because walking quickly was a memory, a faint shadow from her past, like running, jumping, hopping, skipping. She had no desire to hop or skip, but she did want to keep moving, however slowly, around the block.

She wasn’t completely alone. The woman with the eager, shaggy dog approached from the opposite direction.
“Good morning.”
“Good morning.”
A boy with a backpack stepped around her, then ran for the corner where a school bus was pulling up. A rabbit froze on the boulevard, then burst across the sidewalk as she shuffled closer.
The cane still felt awkward in her hand, and she admitted to herself that she was afraid of falling, or even stumbling, but she was grateful for the time. She had time. All she had to do today was get around the block. That was it. One time. If she was still on her way at noon, she could call Leo to bring her lunch. Perhaps she’d be on the next street by then, half-way around. She could pause on the sidewalk, lean into Leo, and eat her sandwich. She hoped he’d remember the lettuce. He never put lettuce on his own creations, but she didn’t like a sandwich without lettuce.
Well, there was one exception—no lettuce on peanut butter and jelly. Her father had packed a peanut butter, jelly and lettuce sandwich in her school lunch once, 75 years ago, and she’d never forgotten it or quite forgiven him—and now she was moving as slowly as her dad in his last days, but on a sidewalk with the sun shining, not some nursing home with handrails on the corridor walls.
She kept going, step by step, almost to the corner, looking forward to turning the corner. Funny how a cliché like “turn the corner” took on real meaning when you were forced to act it out. She’d turn the corner once, turn another one and be half-way there. Now that would be something to celebrate.

She woke to the sound of a dog barking. Not her dog. She had a cat, not a dog. Cats were independent, took care of themselves, and yet were soft, not all panting bones. You could wrap yourself around a cat, or rather, hold still while the cat did its getting settled dance, snuggled in, purred, let you pet it.
Dogs drooled, panted, wagged, jumped up and barked, as this one was. She opened her eyes. The dog was still barking.

She got up, parted the shade to look out the back. No dog in sight, just the shrill bark bark bark. Must be a small dog. She closed the window, but she could still hear it.
Put on her robe, brushed her teeth, started the coffee. The dog was still barking through the closed windows.
She opened the front door to get the paper. Dog still barking, a little louder, a little more desperate, but the higher note persisted, just short of a howl. Maybe it was caught somewhere.
She closed the door, poured the coffee, unfolded the paper, nothing to read on the front page, nothing she cared about.
The dog was still barking. She leapt up, slipping on the newspaper she’d thrown in front of the chair, down on one knee, then up, out the front door with a section of newspaper rolled up in her left hand, the cup of coffee in her right. Maybe she’d throw the coffee at the dog. She didn’t know.
Around the side to her own back yard—fenced yard, no dog in sight—but she still heard barking, barking, barking.
She sat in the lawn chair, took a sip of coffee, lukewarm, unrolled the section of the paper she’d grabbed—the Business section: “Best Buy Out of Europe.”
“Who cares?” she yelled and began to read the article out loud and loudly, pitching her voice to match the timbre of the bark, pacing her cadence to the bark, bark, bark, and gradually, slowly, the numbing words and the regular beat calmed her and the dog until both were silent and at rest, if not peace.

* Inspired by "Another Reason I Don't Keep a Gun in the House" by Billy Collins
Posted by KCoskran at 4:50 PM No comments:

The garden is waiting. She's turned the soil, raked the winter leaves into a pile, bagged them in compostable bags, smoothed the heavy dirt back  into place, and now she is waiting. 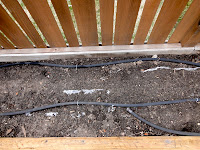 Get some seeds, you say.
Which seeds? she says.
Any seeds, you say. What do you want?
She looks at you as if she doesn’t know what you said or couldn’t hear you, some failure of attention or comprehension. She waits too long before speaking, but then she says, as if in answer to your question. What comes.
or was it a question. What comes?
Comes where? you say.
She laughs, that melodic genuine trill of amusement, even throws her head back so the sun catches the blue of her eyes, matches it to the sky, just as she leans back, looks at you, says, Why here. She’s looking at the smooth garden of dirt. Here, she says again. I want what comes here.
She sounds as if she is speaking to a child, which you resent, immediately, then you realize you still don’t know what in the hell she is talking about. The heat surges in your chest. You ignore it. It’s just a two by six foot rectangle of dirt you’re talking about. Doesn’t matter. Let her have her way . . . which your calm inner voice points out you were trying to do from the very beginning: discern what she wants and then give it to her. You try again. So, what are you going to plant?
Me?
You look around with conscious exaggeration. There is not another person, bird, mammal in sight. Yes, you.
The laugh again. Why nothing. I told you. Just what comes.
You look at the prepared earth again—tilled, smoothed, soaker hose in place. You take a deep, conscious breath, a little louder, more evident, more accusatory then you really intended, but still . . .
Something will come. She’s standing now, brushing off the spade, tidying up, calm and irritatingly faithful.
Weeds will come, you say, It is patently obvious.
One, she says sweetly, how do you know it will be weeds if we are open to everything and, two—the smile—what does “patently” mean in that phrase?
You ignore her patently oblique comment about weeds, her refusal to engage, and go to the second. Well obvious is what anybody . . .
Any fool, you mean.
You defend yourself. I didn’t say that. Anybody, I said, which I suppose, here you smile, a perfect imitation of hers, which would include fools as well as geniuses. You don’t say like you, but hope she feels slightly validated or complimented by the way you wink at her when you say genius.
She’s gathered up all the gardening implements and has stepped around the “garden.” Don’t forget to water it, she says.
Water what?
What comes.
Which will be . . .
Patently obvious, she says.