“Shall I return the call?’
“Yes,” Billy says. “She can’t grab you over the phone. Do it.”
He’s wrong, of course. Billy is seldom wrong—smug, happy, content—that’s Billy—but seldom wrong—except about this, about my sister, about Monica.
Even though he’s seen her in action, he is not afraid. I don’t get it.
“She called you,” he says, encouraging me one more time before he goes out to get on the ladder to clean the gutters. It’s fall, the most beautiful autumn we’ve had in years—the oaks and maples exploded into color at almost the same moment, and the little sumac at the corner of our yard is redder than a witch’s lips. Now the orange and yellow leaves have crowded together in our gutters where Billy will scrape them out before a rain turns them into a reeking clump of mold. He’ll throw them on the grass, rake them into piles with all the other reds and golds, pack them into compostable bags, and line the bags up on the curb for the trash guys. Probably whistling the whole time.
I hardly understand my Billy. I told him that once and he said, that’s why you love me so—took it as a compliment, not the faint criticism I’m ashamed to say was my intent. And he was right. I do love him because he is happy when he doesn’t need to be and even shouldn’t be. Cheerful. Whistling. Like now. And, as I said before, he’s seldom wrong.
He could be wrong about calling Monica. What does she want of me? She already grabbed me with her two-word message: Call me, she said in the imperious voice I know so well. Call me.
In my mouth those words would be subservient, begging, pitiful. In Monica’s, they are an order.
I wait until he goes outside, then I pick up the phone, have it in my hand, look at it, almost ready to do it, but I can hardly breathe. 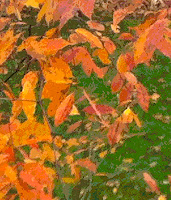 Then I hear a noise and look up in time to see a burst of color rain past the window, a shower so beautiful that I gasp. Billy’s leaves. More beautiful than anything poor Monica has ever seen.
I call her. The phone is ringing, and it’ll be okay. Billy said so, and he is always right.

He left at 10. Said he was going at 9. 9:30 at the latest, didn’t get out of the apartment until 10, on the run, the tail of his untucked shirt streaming behind him. Giorgio was his own comet, throwing up sparks in his wake. His scorched earth practice, he’d said once, and she knew it was true. But she’d loved him anyway. Then.
Now she stood on the steps warming her hands on the red coffee cup, not drinking the coffee—she didn’t like coffee. Giorgio said adults drink coffee, therefore . . .
He ended most sentences with that word, therefore, as if nobody would have any need for the conclusion of a sentence, when he had laid out the beginning so clearly, so succinctly, so precisely.  I don’t love you anymore, therefore . . . and the comet was off, only an hour late. He was precise, but seldom punctual.

She looked at her watch. 10:15, therefore . . . he was on the other side of town by now, heading out, not looking back, never said sorry. The comet had burned itself out, and she was alone. The door banged behind her, once, twice.
She let herself stand in the dark kitchen a moment longer, then dumped the cold coffee in the sink, watched the dark grainy swirl circle the drain and mostly disappear. A line of grounds hid in the curve of the sink—she left it—a shadow to remember—and checked the time again—10:30. Giorgio safely on I-94, heading west. She had an hour. Time enough to shower, do her face, do her hair, change the sheets, splash on a bit of scent, leave the house. Pierre’s train was due at 12, noon on the dot. She was punctual. She’d be on time. Need I say therefore?