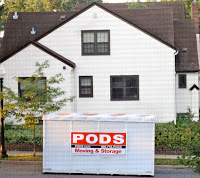 Pods. The neighbors are moving in two stages. All their stuff is stuffed and I do mean stuffed, into not one, but two giant pods parked in front of their house, blocking my view of their chintzy waterfall that wastes water daily.
God, I’d love to see their water bill. Yes, it’s semi-pretty if you like that sort of thing, but the waste: electricity for the pump and all that water. Going where? Nobody knows.
But now I can’t see it. I like to see it, even though I think it foolish, really insane, to install a waterfall in your front yard, your residential front yard, in Minnesota of all places, where winter loves to freeze water lines, especially unnecessary ones, creating highly paid jobs for plumbers. Another bill I’d like to see. They probably have a plumber on retainer.
No, I don’t know where they’re moving to, some condominium, I guess. They’re too old to be relocating, both of them retired from something—don’t remember what.
Maybe they’re living in the pod—about the size of a condo—and this is still a good neighborhood. Probably had the plumber put in a bathroom, and they’ll eat out all the time. She told me that once. We prefer to dine out, she said.
Well, I dine in,  I said, quick as a flash. My preference. Also my wallet, I could have said, but my business is not their business.
Wonder what a Pod costs. We believe in living well, she said—same conversation as dining out.
Well, well. I guess pods are the latest thing. Must be an expensive version and they’ve got an unobstructed view of their—or their former—fish pond.
So new people will be in the house. One can hope there are no children—no noisy children is what I mean, children lobbing their balls into my rosebushes. I’ll tell them about the thorns made for soft hands like theirs. They’ll probably turn the waterfall off so the children don’t drown—or they’ll let them play in it, probably stark naked. What an idea that is! I’ll tell them my water-borne virus story. That always works.
Then I’ll welcome them with my famous brownies, to let them know what kind of neighbor they have.

He was a talker, a natural speaker, a monologist, a droner, on and on, awakened to the hum of his own voice, inspired and verbose, his eyes never leaving hers as he provoked, entertained, explained, explained, explained, went back to the beginning, just before Adam and Eve with his endless commentary on this plant and that, the origin of this particular insect, the flight pattern of that bird, the distinctive shape of a certain fish’s fin, and the obvious subtext, the implied meaning, the connection, not without purpose, of course, purpose, goals, objectives, not being the main thing or the only thing, but if you didn’t know where you were going, how would you get there?
He took a breath. She was surprised he could still breathe. She sighed audibly, purposefully, opened her mouth to speak, but too slowly.
He was gesturing now, hands punctuating speech: we must stay the course, keep our eye on the ball, we can build a better mousetrap, but can't count our chickens until they're hatched, and, at the end of the day, someone has to bring home the bacon. She was fascinated now. The clichés fell from his lips like rubies, each more polished, more familiar than the one before

She was bobbing with him, nodding and bobbing to keep the beat going, the monotonous river of words that no one needed to listen to. As long as she kept the nods and the hands and hmmms and the reallys going, she was free to think, perchance to dream. And, as he was fond of saying, it takes two to tango, and we all know it ain't over till the fat lady sings.

Any chance you’ll get out of prison soon? That’s all he said. A postcard. So everyone read it. Not just the censors. Not just the matron. But the smirking girl who dropped the mail through the bars, the two who sorted mail with their dirty fingers, printing everything they handled with the swirls and curves of their thumb and finger.
Everybody read it. Knew how stupid he was. How sarcastic. He knew the date. She knew it. And soon wasn’t the operable word.

Parole date. Possible parole date. 5 years 4 months 3 days in the future. And then we’ll see.
She turned the card over. Picture of two turkeys, Tom’s feathers flared, wild turkeys. Who the hell sends a person a turkey postcard. Well, who’s the turkey? Who’s the Tom? The man was subtle.
Any chance . . . .?
No chance in Hell. He knew that.
. . . you’ll be getting out . . . aka, you’ll have any idea what your big daddy Tom Turkey is up too
. . . of prison. He’d kissed her at the sentencing, her hands in cuffs, him leaning over the railing, big show, flash of pictures being taken, headlines in everybody’s head: Ponzi Victim Forgives  or   Love Conquers All
If they only knew. She’d tried to explain. The prosecutor twisted her words. “I thought . . . “ she’d said.
“You thought . . ." he’d pushed back. “And what did you know?”
She’d known it was wrong, but did it anyway because he asked her, made it easy. “Better if my name’s not on it,” he’d said—as if his name was something.
“. . . soon.”
Soon was coffee cold in her cup. Soon was one hour in the yard—not a strip of shade anywhere. Soon was the list of inmates with visitors today and her name not on it. Soon was now and no, she wasn’t going anywhere, not now, not soon. 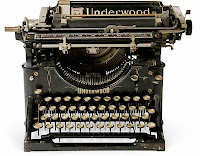 “They’re bringing typewriters back.”
She heard it in the elevator between the 8th and the 16th floors. She bit her lip to keep from laughing out loud, but a soft snort escaped and the young man who spoke—khakis, green cotton sweater with a man riding a horse on the chest, pale goatee, ashy hair that could use a cut, eyebrows that disappeared on his ruddy face, slender, probably biked to work carrying his typewriter on his back.
She snorted again, softly, inadvertently.
He raised his non-eyebrows. “You okay?”
The elevator door opened, the girl in the skinny jeans to whom he had made his ridiculous remark got off. “Lunch?” she said.
“Lunch,” he said. The elevator closed.
“You speak in one-syllable sentences and want a typewriter.” She shook her head. “Do you have any idea how . . .”
“I love the sound.” He’d interrupted her.
“The sound?”
“Clickety clack,” he said. “You know, the sound of something happening.”
“So you want a manual typewriter?”
“What’s the difference?”

26th floor. He got off, ignorant of the difference in sound and function between a manual and electric typewriter, probably unaware of the nearly silent puff of a really good portable typewriter. She remembered her Hermes with affection—a beautiful soft aqua green and such a smooth, light touch—so much better than the awful black Underwoods in typing class. Clang Clang Click Oops.
The man with the goatee was clearly unaware of oops, had never held a typewriter eraser or used erasable bond or those little strips—what were they called? He’d never yanked a piece of paper from the carriage because of one tiny error that couldn’t be fixed or smoothed over.
She wished she’d saved that Hermes. She’d give it to him, take his iMac in exchange, that miracle machine that highlighted mistakes, fixed them, made one look smarter than they were, including a certain young man with an equestrian trotting across his green Fridays’ casual sweater. Nostalgia was for the young.