Did you find what you want?
“What?” Harry jerked awake. “Excuse me. What?”
“Sir, are you finding what you need?”
“Trying to,” Harry said and laughed a self-deprecating laugh. “I’m certainly looking.”
The clerk stood poised to help, waiting, Harry realized, for him to tell her what he was looking for. Which was the hell of it. He didn’t know. You could ask—or answer—that question on so many levels. He looked at her, actually met her eyes—deep brown eyes, widely spaced, red lips, light brown face, spoke with an accent of some sort. She was waiting, trained to be helpful, welcoming, and patient. What was he looking for?
“Razor blades,” he said. 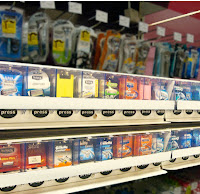 “Aisle 4,” she said and smiles of relief spread over both their faces.
“Aisle 4,” he said. “Right.”
She was pointing the way, delicate hand, no nail polish, to Aisle 4 with its wide assortment of razor blades. Must be what he wanted. What he needed. His hand stroked his chin. Rough. Yes, definitely what he needed. Reassuring to them both. She smiled, turned to go, he bobbed his head and turned towards Aisle 4. Where he knew he would stand gazing at all the choices, the brands, the types of blade, the colors, the price, the per unit cost. Probably stand there, asleep standing up, until brown eyes or her equivalent showed up.
Did you find what you want?
“No,” he could say. “No, not yet, but I’m looking.” The truth. Better than nodding obsequiously, grabbing a handy packet of disposable razors and leaving.
But he knew himself. Knew he’d have another packet of disposable razors to add to the stack at home.
Did you find what you want?
Easy question. No answer.

Posted by KCoskran at 4:01 PM No comments:

She didn’t go to the wedding. She was invited, but she didn’t go. Let’s be friends, penciled in his hand. That slant back scrawl she knew so well, written on my heart, she would have said once.
Don’t be maudlin, Jane would have said, Jane the practical friend, the stalwart neighbor, the wise woman, the shrew. His word for Jane. He and Jane shared a mutual dislike. Jane was reliable to a fault, and the fault always included him.
She didn’t go, and she didn’t tell Jane about the invitation or the wedding. She could let it go.

When she pulled on her leathers that morning, she was still not going. Who got married at eleven o’clock in the morning? A Catholic wedding. St. Agatha of the Agnostics or some such thing. He wasn’t Catholic. What business did he have . . . STOP.
She snapped on the helmet, revved the bike, and went. 10:30.
He’d be squinting in a mirror now, tugging at the tie, the man who never wore a tie, suited up for his whore. She laughed at the thought. 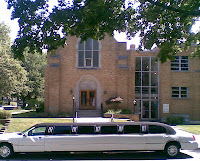 There was the church, limousine already in front, parking lot full—St. Agnes, not Agatha—but it was the place—door open, June sun pouring down the aisle. She drove around the block—bungalows backed up to the church, a couple of girls with chalk drawing on the sidewalk. She slowed down. Neither girl looked up.
Made a second pass. Heard the organ, dum dum te dum. She gunned the bike, paused beside the limo. The driver, suited up like a groom, reading, didn’t look up. Gunned the bike again. The driver didn’t move.
She went around the block again. The girls with the chalk had drawn a purple house the height of three squares—three stories—and were putting in windows, doors, and green grass at the bottom—playing house.
Back at the limo. St. Agnes doors still open at the top of the steps. No music, words now, promises—the bike roared—the limo driver still a statue. She went around again, back with the girls playing house, one of them crying now. What happened? She slowed, didn’t stop. The girls are like she and Jane, and she knows who’s crying.
One more pass at the church. Limo man standing at the side of the car now, people on the steps, rice, noise, music.
She didn’t look, but the bike knew the rhythm, roared and drove away.
He didn’t see her—never saw her. She hoped he didn’t see her. Hoped he saw her. No hope. Doesn’t matter. She wouldn’t tell Jane.
Where’d you go? Jane will say.
For a ride, she’ll say. Get the kinks out.
Good girl, Jane will say.
Almost true.

She took him out on the lake in the early morning, just as the stars were blinking their last goodbye and heading for the Pacific Ocean. “My favorite time of the day,” she said. It had snowed the night before, but the plow had been out before dawn, and the ice roads were open. The lake was an unblemished field of white, dotted with fish houses.
They bumped over the ice heave on shore and then were driving on the smooth, blue ice itself—driving on water, she said. “We’re in house number 11."

“There are addresses?”
She nodded. “Fourth left turn, three miles out. There’ll be a cone.” The houses were rectangular dots in the distance, several with a car or truck parked on the side.
“It looks like suburbia,” he said.
She laughed. She had been raised to drive a truck, a boat, a four-wheeler, and to hunt, fish and grow parsnips. He had been raised to take a cab or, in extreme situations, the subway, to the theater, to the symphony, to gallery openings. He took her to her first opera. She was taking him ice fishing.
They spent the day in the little house, a six-holer. She could have rented a smaller one, but she wanted to impress. She gave him sweet chai and a blueberry muffin to eat while she baited the lines, tied them to the bell that would ring when there was a fish on, and dropped each line down a hole in the floor.
He kept one eye on the hot plate, the other on her crouched over a pail of minnows, threading live ones onto a hook, dropping them in the inky hole of water at the corner of the house, noticing again how lovely this woman was, the sheen of dark hair gathered at the nape in a scarf, the smooth cheek, full lips, pursed now to hook a minnow without killing it.
The house was as warm as she had promised—propane—and smelled of hot milk and tea. She was sitting across from him now, hooks set, tea poured, muffin crumbling in her strong hand. Beaming. The only word for her. She was beaming, a star in the little house, a light, an aria, the only one he would ever need.