Stella didn’t remember if she’d washed her face. It was wet, but was it clean? She closed her eyes and tried to visualize soaping her hands, the feel of her palms on the bones of her face, her fingers along the dent beside her nose, the hard plate of her forehead, the slide over the cheekbones, those high chiseled cheekbones she’d been so proud of—to her chin. She couldn’t remember doing it, so she soaped her hands and washed her face. 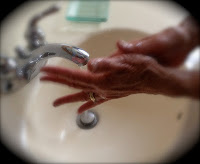 Minor points. It didn’t matter if she washed her face twice in one ten-minute period. Didn’t really matter if she didn’t wash her face at all that day—or the next. Who would care or notice?
Stella depended on the dictates of routine. She didn’t remember brushing her teeth, but she was sure she had. Her mouth tasted fresh; her skin had the tight, antiseptic feel of just washed skin. So she had washed it. Good. And hadn’t put on face cream yet.
She dipped her finger in the Ponds cold cream jar—her mother’s favorite. That she remembered: her mother rubbing thick white cream onto her face and chanting—that was the only thing to call it—chanting—go, wrinkle, go—dis-a-pear-a-pear. When Stella first heard the word, the new word, dis—she had thought of her mother’s incantation to her own face—dis-a-pear and had thought that is what dis meant: the beginning of disappearance, a fading away, an erosion of what is not wanted. Which, in a way, it was.
Her mother had been beautiful. She remembered that quite clearly. Truly beautiful, with bright blue eyes, high cheekbones, full lips and all that hair. Stella had inherited the cheekbones and not much else.
So long ago and about the only thing she remembered with any accuracy these days. It was clear she was losing her mind—well, not the entire mind, just the memory. She knew that. The actions of the closest days, the most recent events disappeared before she came close to grasping them; they slipped through her fingers onto the floor and under the rug. Whatever happened five minutes ago was gone for good.
She opened her eyes and shook herself. Enough of that negative thinking. She was fine. She’d get by.

She looked in the mirror, liked what she saw. “Look at those cheekbones,” she said, and turned on the water, soaped her hands, and began to wash her face.

Roger was late, but she knew he would come eventually, slightly out of breath, almost apologetic, blue eyes momentarily cast down as if he were actually sorry that he had her pacing, looking out the window, looking at her watch, looking at her phone for the exact time, not calling him, but wanting to, looking, looking, looking. He’d breeze in, breeze past, rifle through the magazines on the coffee table, say something, and she’d listen, neither of them looking at the other.
She looked at her watch. 10:08. He said he’d be there at 9:30 if traffic weren’t bad. Coming into town at that hour would be bad, he predicted. His predictions were always right, and now he was right again.
She should learn, go to the grocery store, do something, so he’d have to wait, have to sit on the stoop—he always forgot his key—knew she’d be there waiting. She was just getting her keys when he pulled in the driveway.
Shit, she said, out loud where nobody heard her, and opened the door, smiled, let him breeze past, his lips barely a memory on her cheek, let him rifle the magazines, drop his bag on the stair, and now sit at the kitchen table like a customer in a coffee shop waiting for her to reanimate herself and bring him something. He knew it took her a minute to recover from his entrances, and he always waited.
He was waiting now, punching buttons on his phone as if he had something to do, but really waiting for his cup of coffee, for the cookies he knew she’d baked, for the news of the neighborhood, waiting now, his turn to wait—so she let him.

And then she’d get the coffee, the cookie, and tell him about the Mason’s divorce, the lost cat from the corner house, and how, just today, when she stood at the bathroom window in the early morning a doe was grazing in the backyard and, after several minutes of waiting, a fawn trotted up to join her.
“Mother and son,” she’d say.
“Just like us,” he’d say. 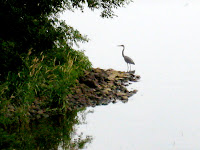 The heron was at the point every morning, standing ankle deep in the calm water.
“Look at that bird,” she said. “She’s been there an hour. Hasn’t moved.”
“He’s fishing,” he said. “He’ll move when he sees something. Probably too fast for you to notice.”
“I think I’d notice a fishing bird,” she said. “That one is simply standing—meditating, living in the present, breathing in, breathing out. That’s what she’s doing—perfect yoga posture.”

He wasn’t listening. She knew he wasn’t listening because he didn’t laugh or snort or correct her. She went a little farther out on that fragile limb she constructed every morning, the only time they talked.
He was standing up, slugging down the second cup of coffee, ready to be out the door, revving up some machine—chain saw, weed whacker, power washer—taming the place, he had said.
"More re-taming?" she said.
“What’s that?”
“You’ve already beat the weeds back, whacked around every tree trunk, paved what you couldn’t seed with grass. What else is there?”
“I’ve got a lot to do,” he muttered and let the screen door slam behind him. A machine started up a few minutes later. Sounded like the splitter, slicing through the last of their maples.

The heron heard it too. She hesitated, then lifted her great wings over the calm water, and with no effort at all let the wind carry her far away.

She never slept. That’s what she said. That’s what she believed. I go to bed. I lie down. I close my eyes, but I don’t sleep. It’s my active imagination, my life of the mind. It’s as if I’m at the picture shows all night. I don’t sleep.
She did look tired, haggard, worn. She’d always been thin, but now there were folds of skin lapped in the hollows of her cheeks and curtains of flesh hung at the rim of her hands and arms. Thinking she didn’t sleep depleted her, they said, and the short, summer nights made it worse.
May said it was her belief that she didn’t sleep that wore her out. She slept. Everybody slept.
Jane said it was her diet—too much coffee.
Helen said they were both wrong. If Mother would just get a little exercise, then she’d have some reason to feel tired and would get enjoyment and real relaxation from going to bed.
It’s spiritual, Juliana said. We all know she’s never given a moment’s thought to the condition of her soul.
Rachel said nothing. Her four sisters had an answer for everything, particularly about their favorite problem, Mother, the insomniac. Yes, Mother looked like hell, but she was nearly 70 years old. What did they expect from 70?

On Monday, May dropped off Watery Depths, a CD compilation of the hypnotic sound of lapping water on beaches around the world.
On Tuesday, Jane left a variety pack of soothing herbal teas, artfully arranged in a pine straw basket with a card that said “All you have to do today is breathe in, breathe out.”
On Wednesday, Helen gave her a month’s trial membership at Curves.
On Thursday, Juliana brought her the meditations of Meister Eckhardt.
On Friday, Rachel dropped off a three-speed, oscillating fan.

Saturday morning she looked at the clock, 5:32, and threw an arm over her eyes. She hadn’t slept. Not at all. She’d spent the night in calculus class again, probably her least favorite nighttime activity, nightmare, whatever you want to call it. It really wasn’t a nightmare or even a dream because she was there, really there, the whole night long, sitting in that desk, understanding nothing as shy Miss Ripley droned on. The class was boring and humiliating at the same time. She had been in that class, in that desk, too often of late. She’d find a way to eliminate calculus class from her nighttime possibilities. She’d rather be anywhere else—naked on a bus was a summer favorite—initially embarrassing but comfortable on a July night.
She got up, went in the kitchen, and made coffee—French roast, fine grind. Jane’s array of teas were on the kitchen table. “Nice try,” she said.
Juliana had turned down a corner in Meister Eckhardt: "If the only prayer you ever say is thank you, it’s enough.”
“Thank you, Juliana,” she said out loud.
The Curves gift certificate was under a magnet on the refrigerator. “Thank you, Helen,” she said.
It was hot, already over 80, no wonder she didn't sleep. She turned on the fan. “Thank you, Rachel,” she said.
She picked up the CD, Watery Depths, between her thumb and forefinger and held it out like something long dead. The title waved together: Watery Depths, Watery Depths, Watery Depths, $19.95. Well, hell, May had paid almost 20 dollars for it—she better try it. “Thank you, May,” she said and slipped it in her CD player, poured a mug of coffee, and, as the fan blew across her face, she read the name of each packet of tea before dropping it in the Salvation Army donation bag she kept for her daughters’ gifts:

The Curves certificate with her name neatly excised from the “a gift for” line went next. She popped out Watery Depths before it trickled to a close, slid it in its blurry blue cover, and placed it on the Curves certificate. She dropped Meister Eckhardt on top, said “thank you” again, and closed the bag. 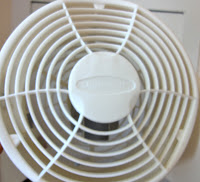 She'd keep the fan; it would feel good on her naked body when she got on the bus tonight.