The owl moves soundlessly through the trees, displacing air, setting branches into motion in the quiet of doing what she knows how to do without thought. 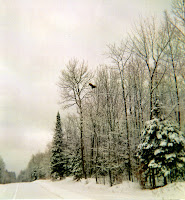 I almost wrote without conscious thought, but that’s not it. Not right. The owl is conscious, supremely conscious, perfectly in touch with the soft animal of her body. (Thank you, Mary Oliver.) She is conscious, but lacks anxiety, the consciousness of being conscious, of thinking, thinking, thinking, of agonizing over a decision.
Imagine the anxious owl. Okay, today I wlll drift soundlessly (almost) through the woods, dive for the first rodent I see. She spies a mouse. Is it the best mouse, the fattest? Is it ethical to eat a living, breathing creature? a formerly alive creature? A creature like me? Why can’t I be satisfied with seeds, like the chickadee or nectar like the bee? Then the owl laughs at her own absurdity. How would she look hovering in a bed of zinnias? She’d have to eat the whole flower to get the drop of nectar. Ridiculous, she thinks. I’ll eat the mouse, but by then the mouse is gone, and not only does she feel stupid for even considering going after nectar or sunflower seeds, she’s still hungry and thus anxious.
See what I mean? The owl is spared, or spares herself, all that. She’s an owl, riding the waves of air, eating what she eats, living her life.
Wise, wise owl.


I can hear her crashing around downstairs, in the kitchen, opening cupboards, letting them slam closed, dropping something on the floor—sounds like a spoon or maybe that long-handled knife, dull as a toothbrush, but a wedding present from somebody’s aunt, who knows whose—well, she does. She remembers stuff like that. Personal trivia, I call it, so insignificant that nobody else knows or cares or can check up on when she says, oh, yes, that candy dish—who has candy dishes anymore—that candy dish came from Sylvia’s house. She wrapped it up for our wedding, didn’t think I’d notice.  Here she would laugh knowlingly, to let you know she noticed everything, every little thing, every goddamned little thing. Nothing escaped her.
Another crash downstairs. More like a thump. Something big out of her hands now. The toaster? A loaf of frozen bread? Meat she’s thawing for the dinner I’ll cook?
When I ask her she’ll look at me with those wide girl eyes, bluer than the day I met her, magnified by the specs and say, “What, My Love? I didn’t drop anything.”
I could point out the wet spot on the floor or the shards depending on what it is—but I won’t. What, My Love? says it all.

No wind today. Not a breath of air. Nothing yesterday. No wind. No rain. Not a cloud in the sky. Blue as far as you can see. If you like blue. I guess it’s beautiful. She made me paint the house blue, sky blue, so you think of the sun and the moon, all things cosmic, she said, when you look at our house.
Our house.
Our house was always her house and everything in it that was beautiful that was orderly, in its proper place, that was blue.
Still is. Orderly. Proper. And, I suppose, beautiful. Certinly blue.
Did you know there were so many blues? she said once, clapping her hands in delight.
Can’t say I’ve thought about it, I said.
Made her laugh. Oh, you love blue as much as I do, she’d said and smiled. Happy. It took so little to make her happy. Just a color.
You only have to look up, she said, and there it is. Blue, blue, blue . . . like today.

The sky so blue. Not a cloud. Just that smooth, clear blue. Nothing moving. Not a breath of air. Which is why I can hardly breathe. Must be the reason—all this blue—such a blue sky today. My happy blue, she would say if she were here and mean it. But I, I look at that sky and can’t breathe. Can’t catch my breath. It’s so blue, I can’t breathe. 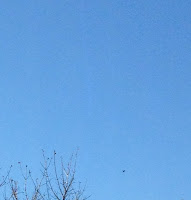 He collected rocks.
“You can’t collect rocks,” she said.
He raised the left eyebrow, a trick he’d developed after weeks of practice when he was 14 and, by his own admission, self-absorbed.
“Unlike now?” she said, her feeble attempt at sarcasm or was it humor?
But that was long ago early in the . . . .what? relationship? a word they both eschewed and the avowed reason for not being on Facebook. Neither could bear the thought of filling in the blank, “in a relationship with _____________. So they were digitally invisible, virtually not there, cloud-free and that’s the way they liked it. Total agreement.
But rocks? Just so much gravel to her. Inert. Dirty. Undistinguished. Anybody can pick up a rock.
“The origin of the earth. The story of the planet. Each one old, solid.”
“What about mica?”
“It’s a mineral, not a rock, a sheet silicate mineral.”
“And the difference is?”
“All rocks are made up of two or more minerals, but minerals are not made of rocks.“
He had more to say, much more but she didn’t encourage him. It was enough to know that mica was not a rock, and that she wouldn’t be sweeping up shards of mica for the rest of her life. She loved him in spite of his geological obsession, but his birthday was coming, and she was stumped. What to get a guy who has rocks on his bookshelves instead of books, lined up by size, shape and formation: igneous, sedimentary, metamorphic? What to get him that he didn’t already have?
She laughed out loud when the answer came to her. A rock. The premier rock. The best rock, and, yes, the most expensive rock, the rock that shouted RELATIONSHIP without going near Facebook, a rock he would wear everywhere, and then, maybe, just maybe, he would get her a rock too.