The boy ran through the woods screaming and crying, ran through branches scraping his face like fingers. He stepped in a hole, fell, got up, and ran. The dog ran with him—stopped when he fell—and then they ran again. Screaming took too much air, so he forced himself to quiet down, to stop crying, but he didn’t stop running. The old dog stayed right with him, step by step, and when he fell down again and stayed down this time, the dog lay next to him, close enough that he could feel the damp heat of her body. He put his head on her neck and let the rise and fall of her breath slow his. When he was calm and rested, he sat up.

The dog leapt up.

It was just twilight. The last rays of light were fading and the woods were darkening fast. The cicadas were already out and he heard some small animal—probably just a mouse—moving in the leaves nearby. He wasn’t afraid. His daddy would have given up long ago, but they couldn’t stay in the woods all night. The mosquitoes had come out with the cicadas and were already feasting on his sweaty arms and neck.

“Let’s go,” he said to the dog. He hitched his shirt up over his neck and held it there to keep the mosquitoes off and they walked quickly. His eyes had adjusted to the dim light, and he knew where they were. It wasn’t the first time he’d fled the strap at night, but it would be the last.

He turned towards town when they got to the county highway. The sky was clearing and the stars were out, every one of them. A breeze had come up. He let go of the neck of his shirt and took a deep breath. Alfalfa just in bloom.

They were two, three miles out. Good. He needed the time to consider what he would do next.

The cicadas were still loud in the fields and the wind played a ripple of sound in the young alfalfa. The air was sweet and the starry heavens were more beautiful than anything on earth. The bowl of the sky so perfectly surrounded them that the boy didn’t have to look up to see the stars. They were everywhere. Everywhere.

After a while he saw the lights from the Shell station on the edge of town and the great yellow sign he once mistook for the full moon. He still remembered the air in his chest when he’d seen that moon of yellow. “Daddy,” he’d whispered, “Look at that. The moon.”

His father had laughed. “Stupid kid,” he’d said. “Goddamned idiot kid, that’s what I’ve got.” And then he’d told the story a hundred times how his moron for a son thought a GD Shell sign was the moon.

The boy stopped walking. The moon of the gas station beckoned and the stars overhead waited. The dog sat patiently.

He couldn’t go to town. There was half a chance his father would be there waiting for him. It had happened before. What had he been thinking?

He smiled. The yellow neon sign had saved him this time. He wasn’t a complete idiot. And he was 15 now, not 5. Almost a man. 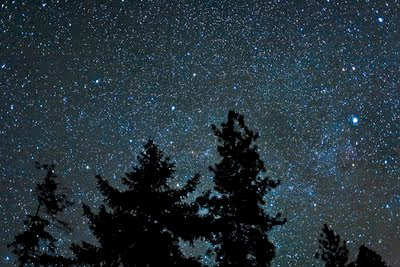 He turned and started back down the way they had come. The dog didn’t hesitate. She was right there with him. “Look at that sky, will you?” he said. “There’s only one moon, but stars! There’s a million other stars. A million other places to be.”