She’d looked out that window her whole life, imagined her father holding her up minutes after she popped out—her mother’s words: You just popped out, I was so grateful—imagined her father holding her up to the window and saying, There, that’s it. What you’ll see of the world.  Ain’t it beautiful?
It was beautiful. She knew that, had never tried to convince herself otherwise. The rise of the hillock in the distance, the ring of pine trees her granddaddy planted at the end of the yard, Fairy Ring, he’d called it. “It’s where the wee people live,” he claimed, and she believed him.
There had been times when she saw tiny footprints on top of the snow or a flash of red darting under a leaf. They were there—elves, leprechauns, the little people—who knew what they called themselves? She called them Smoke now, because she hadn’t seen their traces in ages and was beginning to doubt the old stories. Regret can do that.
She should have moved at least once, lived somewhere else, but roots are deep—Granddaddy again—that’s what feeds us.
Well. She had been to Chicago once, had stayed in a hotel, knew what it was to wake without seeing the sun rise, and didn’t like it all that much.
But still.


A wave of regret swept through her. She’d always been here, lived here, woke up here, went to bed here, looked out this window. Here.

Birthdays did this to her, brought her to the window where she’d first looked out on the world, and here she was again—90 years later—the oldest person in the history of the family and still here.

Well, that was a thought to be glad about. She took a last look out the window and saw the streak of red—two of them, pointed hats and all—darting over the snow. Still here. 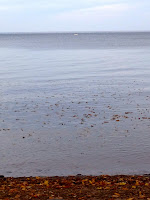 He went fishing alone. She watched him push the boat out, climb in, sway in the sudden thrust of a wave, stagger to the end, sit down too hard, pull on the old motor. Three hard pulls before it caught. Engine noise. Big racket.
When the mergansers fishing in the bay fluttered up and away at the sound, she stepped back from the window. Into the little house. The cabin. To do . . . what?
He’d invited her. “Want to go out this morning?” he’d said, she in her pink quilted bathrobe, he in his green turtle neck, flannel shirt, rain jacket under his arm, tackle box at the door, two poles in his hand. “Nice morning out there.”
They’d both looked out at the lake. She had to see what he saw—smooth water, almost a glass-off, three female mergansers fishing in the bay, the sun up, the maple on the shore an explosion of gold.
“Beautiful from the boat,” he had said. “Beautiful to see the cabin from the boat.”
He saw the slight movement of her head, thought he heard no. Her arms hugged her narrow body, her face still turned to the window, turned to the lake, to the newly risen sun, to the brilliant maple, but away from him. “No,” she said in an almost normal voice. Clear this time. Sure.
He had to ask. Thought the roll of the boat would soothe her in a way that he couldn’t. Didn’t seem able to. Didn’t know how to. Nothing right between them, and he didn’t know why.
Didn’t know how to ask.
He swung the boat around parallel to the shore, so he could see the cabin, cut the motor, and dropped the anchor. He baited his hook and cast it high and wide, a beautiful cast. He hoped she saw it. He looked at the cabin, but it was too far to see anything behind the black window. Too far. He strained for a glimpse of pink, of her watching him look for her, but it was too far. Too far.