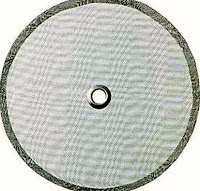 She didn't respond. Not surprising. She was washing the coffee pot--excuse me!--the French Press Pot, so much more than a coffee pot. She was washing the French Press Pot, ramming every stray coffee ground--kernel? crumb? coffee bean shard?--whatever--through the mesh of the screen, the particles she couldn't lift out with the long nail on her little finger. She kept it long expressly for that purpose.
To clear a coffee pot?

He didn't care, really didn't care, and more importantly didn't want to know the details of her manicure. She was intense--part of the attraction he had to admit, that gift she had for zeroing in, looking right at you, into you, through you. Nobody had ever looked at him like that. And with those eyes. What color were they? Brown? No, something more than brown. There was a light, a brilliance, in her eyes that warmed and pierced at the same time. He loved that, but now they were examining every millimeter of a fine mesh screen with as much interest, he had to admit, as she might turn to him.

Eyes still on the filter screen.

She was rinsing the screen, shaking it dry, lining up the cross plate, the filter, the spiral plate, screwing them back on the plunger, drying the pot, reassembling it. He knew she wouldn't speak until one job was done, completed, fini--and the shining pot back on the shelf, in its final resting place--no multi-tasker, that woman.

Then....he never knew what would come next....her cup to scrub or would she swivel to him now, with some comment or correction about the earth?

No, her hands were wet. She stared out the window as she dried each hand, finger by finger--perhaps her intensity did allow for two actions--looking out a window as she dried her hands. Then she folded the towel, hung it up, turned, those dark eyes glowing--more than usual? An extra flash? Hard to be sure.

"You are what looks good," she said, and came for him, only one thing on her mind.