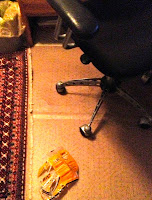 “What happens to the pens? I buy a ten-pack of cheap pens on Monday. By Friday they’re gone.” No response. His daughter is sprawled on the floor, buried in. . . . a book? Her young mind captured by the power of the written word? Oh, no, she’s hunched over her phone, both thumbs flying—texting? tweeting? playing a mindless game? but not reading.
“Are you eating them?”
Her head raises slowly as if from a trance, the phone makes a metallic sound, then a swish, then the sound of applause. The phrase one hand clapping flits through his head—that sound exactly.
“Eating what?” she says, looking at him wide-eyed with that face he has loved for 14 years, that baby’s face, wide brown eyes, his nose—he was always sorry about that—once thought of apologizing, the child’s face now more woman than he is ready for. “Eating what?” she says again. “I had toast for breakfast.”
Now he feels silly, standing there holding the empty cellophane wrapper that the pens came in, that he’d found on the floor next to his desk. She could have at least taken the half step to the trashcan, thrown the evidence of her teenage sloppiness away.
“Eating what?” she says again, for the third time, interested now, those bright eyes alert as if she knows she caught him in an irrational burst of anger.
“The pens,” he says with enough edge to his voice so she knows it was a reasonable question when he first asked it.
“The pens?” she says. “Am I eating the pens? Nope, not me. I don’t like the taste.” Her thumbs are moving on the phone again, a bell sounds in her hands, then another. He’s still standing there. She looks up. “Ask Mom.  She’s weird like you.”
“Okay,” he says. “Right.”
Her thumbs are really moving now. There’s music. “Good job,” a female voice says as he turns to go. Applause. One hand clapping.