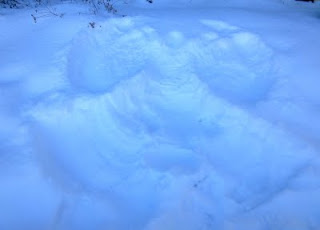 His boots squeaked as he strode across the yard towards the frozen lake. He paused at the snow angel, didn't want to see it, but couldn't look away. She’d made it a week earlier, in the morning, just before she drove into town, hit black ice, rolled the car and died. Instantly they said.

The angel was sunken, barely recognizable now. The hole in the wing where she put down her hand to push herself up was deep and jagged at the edges. She hated that hole. There has to be a way to make an angel and then float up with no evidence of the struggle, she’d said.

He remembered the light in her face when she said that, her delight in the transformation from snow angel to earth woman. She never sat, she moved, she laughed, she made snow angels because that’s what you do when it’s 20 below, and there’s fresh snow without a mark on it.

Don’t you want to make one?

He did not. The idea of falling straight back and dragging his arms and legs through icy snow had no appeal. And how would he get up? He didn’t do that sort of thing, never had, not at 8 or 18 and certainly not at 70.

He stepped around the week-old imprint, then turned back to look at the crusty angel one more time, the ragged old angel with a holey wing and concave skirt where she’d sat up to get her breath before putting her hand down the hole to stand.

If he fell down right beside it—beside her—his angel would be big, with great wide wings that grazed the tip of hers, that held her in place, that kept her safe and near.

He pulled his jacket around his neck, bent his knees, and let himself go.

It was cool and soft. She’d told him the snow was a welcoming bed, but she never said what the sky was like when you lie in the snow on a clear, cold day. Another of her secrets: that ocean of blue, that clear shot into space, that vision of infinity, of up, up, up. The day was quiet, and there was no wind when his arms began to move up and down, and his legs made long, wide arcs across the snow, again and again, and when he was done, and it was time to get up, he just flew. Why hadn’t she told him that? Another of her secrets. That’s what happened. 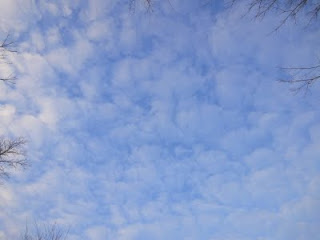