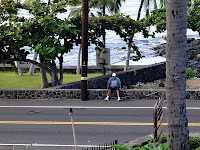 The old man was on the lava wall before daybreak every morning, feet planted wide, grey T-shirt, white cap, white socks, white Keds, a word for everybody who passed by. Aloha, he said, as if he knew who they were or wanted to.
Kevin was annoyed by his very presence. Karen, predictably, was charmed. She loved constancy, admired routine, thrived on opening a door or drawer and knowing exactly what would be there and in what order—wooden spoons on the left, peelers and graters in the middle, rubber scrapers and that rubber brush nobody needed on the right.
Anal.
Efficient.

The second week Kevin crossed the street on their morning walk so he wouldn’t have to acknowledge the old guy. Karen plowed on. Aloha, she said.
Aloha, the old guy said.
You don’t even speak the language, Kevin said when they merged at the Islander Inn crosswalk.
What language? Aloha is what you say here—hello and goodbye.
I don’t, Kevin said.
That much was clear.
Karen was already on the balcony when Kevin got up Sunday morning, New Year’s Day. Something’s wrong, she said. Look.
The man was there, as usual, same outfit, same posture, elbows on his knees.
What?
Look at his head, she said.
Hard night, Kevin said. He knew the feeling. Had the feeling. They’d brought in the new year in style, Mai Tai style, and his head rocked with it. He wasn’t surprised to see the old guy looking the way he felt.
Something’s wrong, she said again.
Forget it, he said. Old aloha man is hung over. The guy’s daily appearance on the wall made sense to Kevin now—a stop on his way home to a woman who noticed too much, rearranged everything he’d ever set down, was always fixing things. He felt a surge of unexpected admiration for the old guy—and was about to say that when he heard the door close behind Karen and a minute later saw her cross the road to the man slumped on the wall.
Let him be, he said to himself, but he watched as his wife bent to aloha man, talking earnestly, her hand on his shoulder, her lips nearly touching his ear. Saw him sway, saw her catch him with one hand, raise her other hand to her ear, cell phone at the ready, 911 on speed dial.
He almost shouted let him be, but he needed coffee first, needed to brush his teeth, needed to shower, needed to get dressed, needed to turn away, but instead he stood watching, irritated, perplexed, finally sat down on the stool on the balcony when she sat down next to the old man, watched her take his hand in hers, saw the guy shudder when she leaned into him, whispering, Kevin knew, that everything would be all right.
Which, knowing Karen, would prove to be true and, Kevin, reluctantly, but to his credit, hoped would be so.